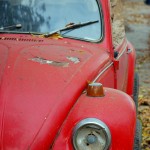 So here’s what happened.  In my ever growing collection of customer satisfaction examples this one is a howler.

Our car was in the shop. In another city. About an hour away.

The mechanic called and said it would be ready that afternoon and that he would arrange for a driver to pick my husband up from the train station and take him to the garage.

Everything was timed perfectly. The garage knew what time the train was arriving and DH (stands for Darling Husband in case you don’t know!) knew where to wait for his ride.

It turns out that the driver has gone to the wrong station.

DH settled down to wait for the driver. No big deal.

The big deal came a few minutes later when the driver arrived. He was driving OUR car.

Now that IS a big deal because the driver most certainly did not have our permission to drive our car around the busy city streets – and not only that he was NOT insured to drive it.

If we had known that the ride was in our car, DH would have simply hopped in a cab and arrived at the garage under his own steam.

As it is, by the time he got there he was steaming about the inherent risks in driving our car completely without insurance.

So what started out as a great customer satisfaction example turned into a terrible one in about 30 seconds. From fabulous to frantic in less time than it takes to put the car into drive.

No matter how good your customer service may be, you can destroy your goodwill in no time at all if you’re not careful about every single interaction with your customer.

← What is a SWOT analysis? – Find Out and Boost Your Business!
Customer Service Number – Make Sure Your Customers Know Yours →